The garden heart of the former Cistercian monastery Michaelstein includes a herb garden, a vegetable garden and an apple garden. They were recreated between 1989 and 2010 according to mediaeval plans and show a large number of historical curative plants as well as vegetable, fruit and field plants. The inner courtyard of the abbey, enclosed by a cloister, and the exhibition “Klostergärten: Entwicklung – Nutzung – Symbolik” (Abbey Gardens: Development – Use – Symbolism) add to the offerings for garden enthusiasts. Additionally, the enclosure and the music exhibition KlangZeitRaum (SoundTimeSpace) can be visited year-round.

Michaelstein Abbey was founded as a Cistercian monastery in the 12th century. After the Reformation, the monastery operated as a convent school and a seminary and from the beginning of the 19th century into the 1970s, an agricultural use followed. Around 1977, Michaelstein Abbey became the seat of the Institute for Performance Practice for Music from the 18th century (now the Saxony-Anhalt Music Academy for Education and Performance Practice) and has housed a museum since 1988.

The abbey, which is funded by the Kulturstiftung Sachsen-Anhalt (Saxony-Anhalt Culture Foundation), has remained intact as a self-enclosed mediaeval complex. The distinctive features include the completely preserved cloister and the impressive, simple enclosure rooms. Fruit meadows, abbey ponds and corridor names such as Weinberg (vineyard), Gemüsegarten (vegetable garden) and Hopfenkamp (hop field) testify to the one-time use of the former abbey.

The newly created abbey gardens convey impressions of life at the abbey and of the garden architecture of the Middle Ages. With approximately 260 species of historical curative plants and about 100 different varieties of vegetable and field plants, the herb garden and the vegetable garden preserve a mediaeval treasure trove of plants. The centrepoint of the design of the two gardens are plantations and raised beds according to the model of the St. Gallen Abbey plan. Since 2010, there has been an apple path with renowned varieties surrounded by a wild flower meadow. The inner courtyard of the abbey, with a grass surface, rambler roses, a herb plantation and a wayside cross, is also noteworthy. The exhibition “Klostergärten: Entwicklung – Nutzung – Symbolik“ (Abbey Gardens: Development – Use – Symbolism) offers information on garden history and shows connections with medicine, food and fine arts.

The music exhibition “KlangZeitRaum” (SoundTimeSpace) traces the change in sounds and musical instruments over time using instruments from four centuries. All areas of the museum are accessible year-round during the opening times. A wide variety of tours and projects are offered under the motto “KlostERleben” (Abbey Life/Experience Abbey). Michaelstein Abbey offers a rich programme of events and is a popular excursion destination on the Romanesque Road. 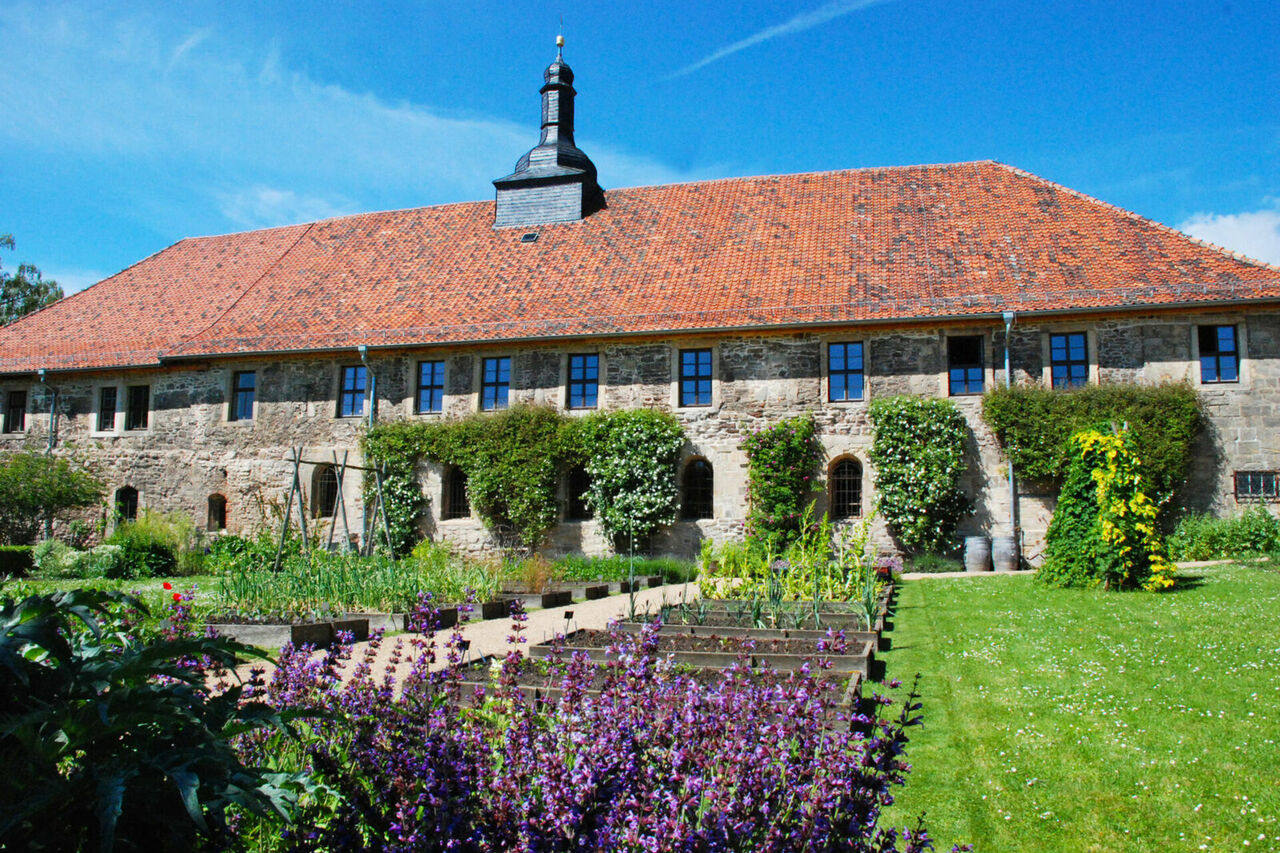 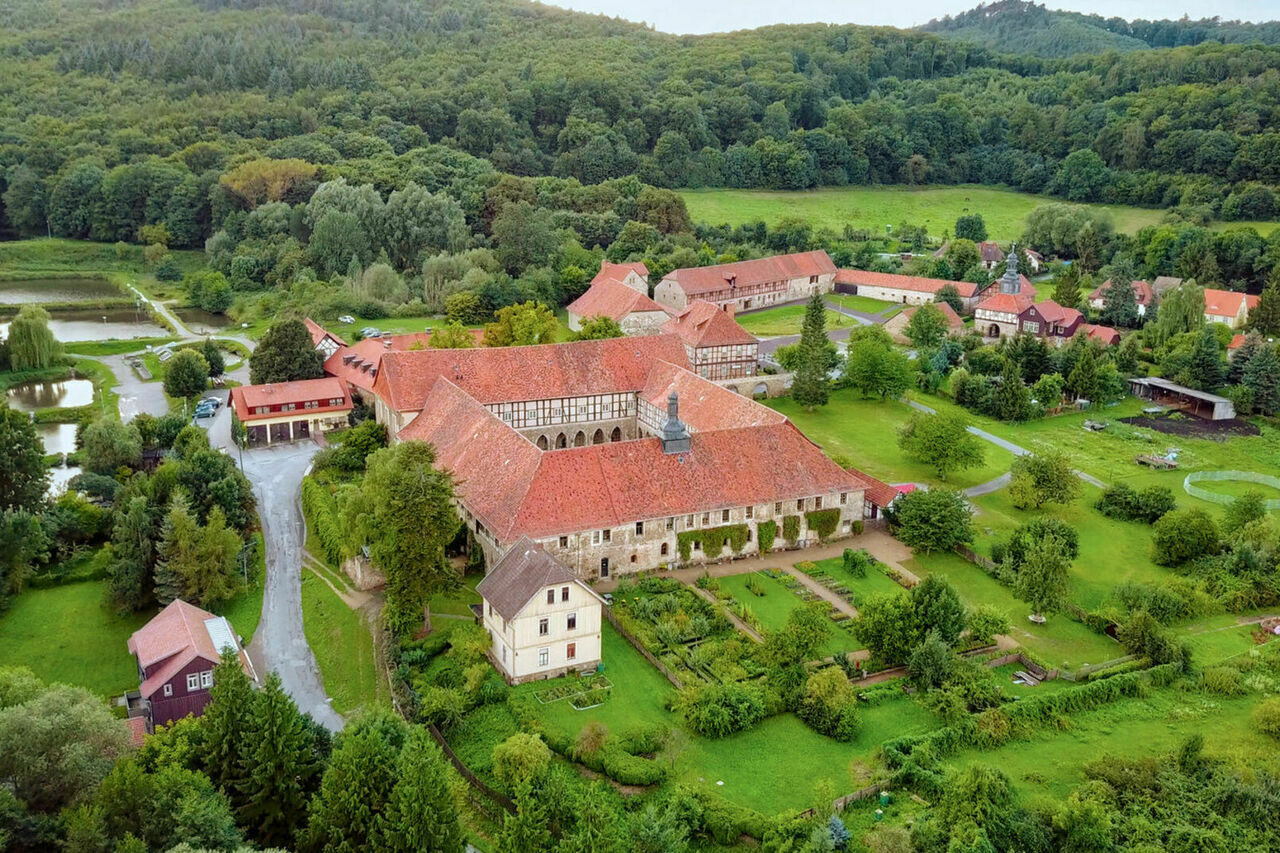 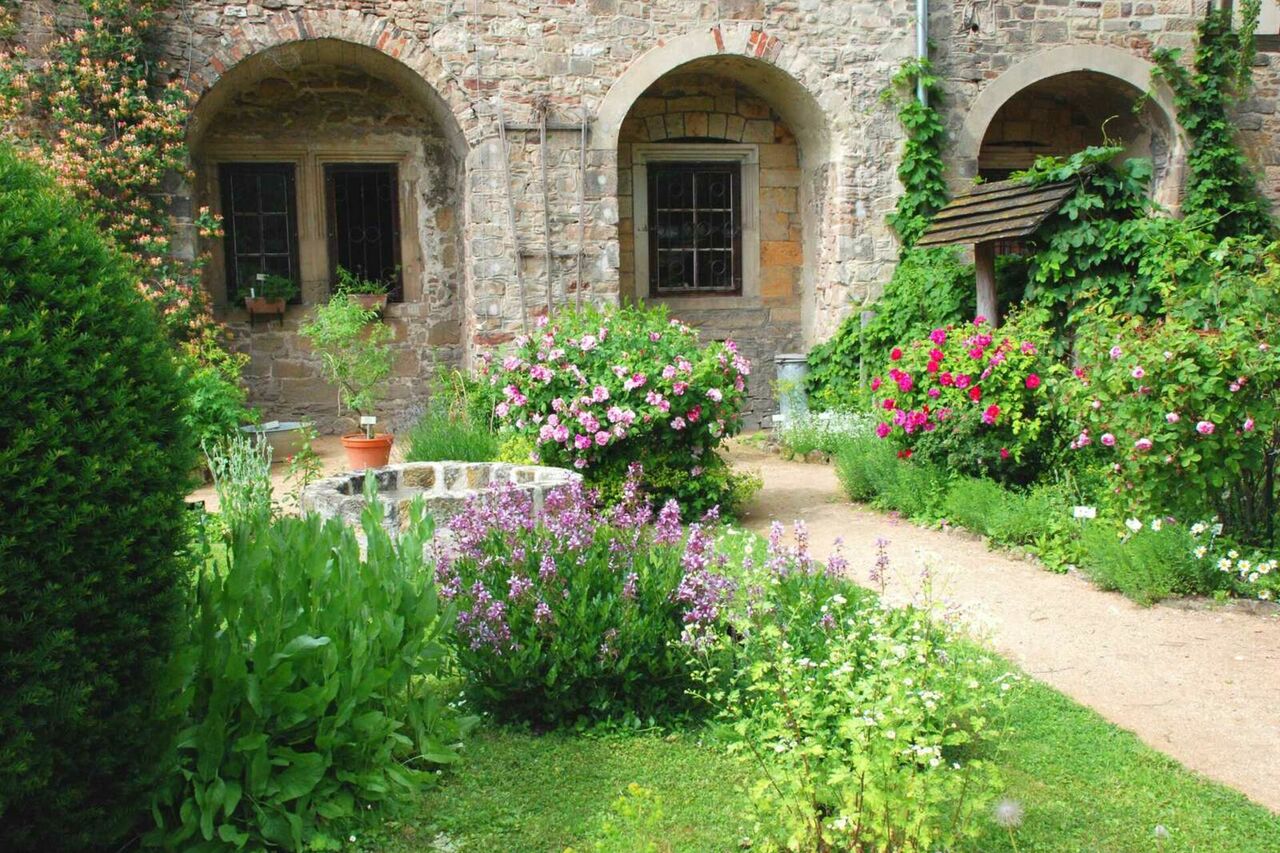 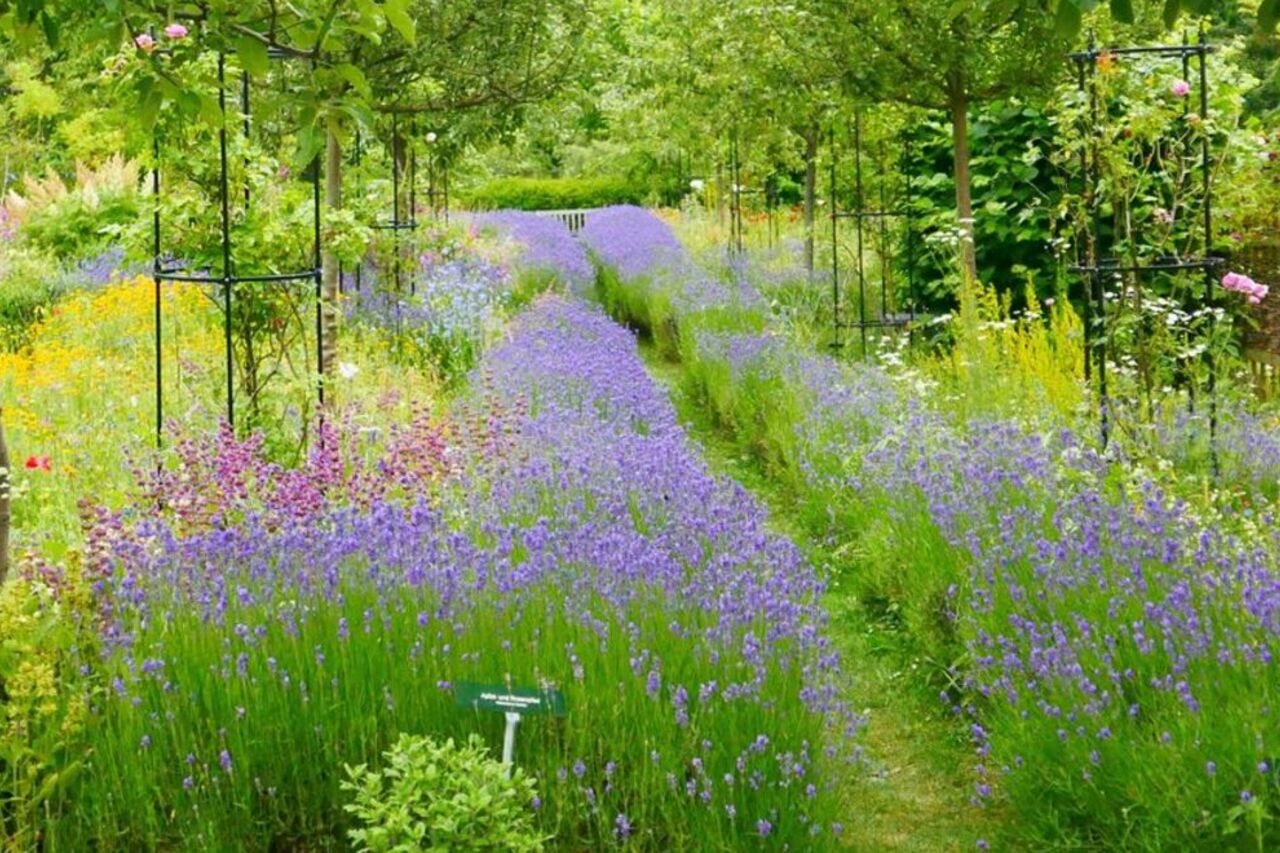 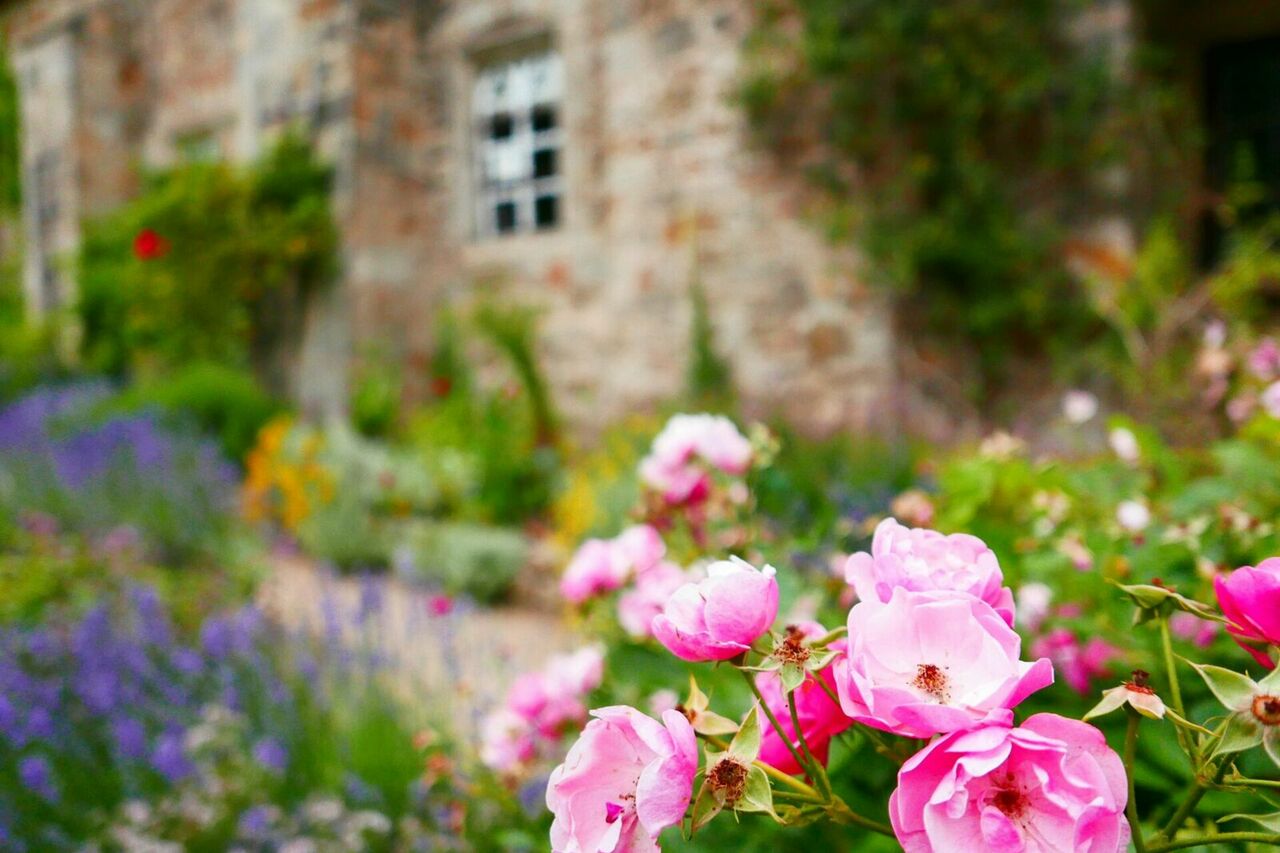 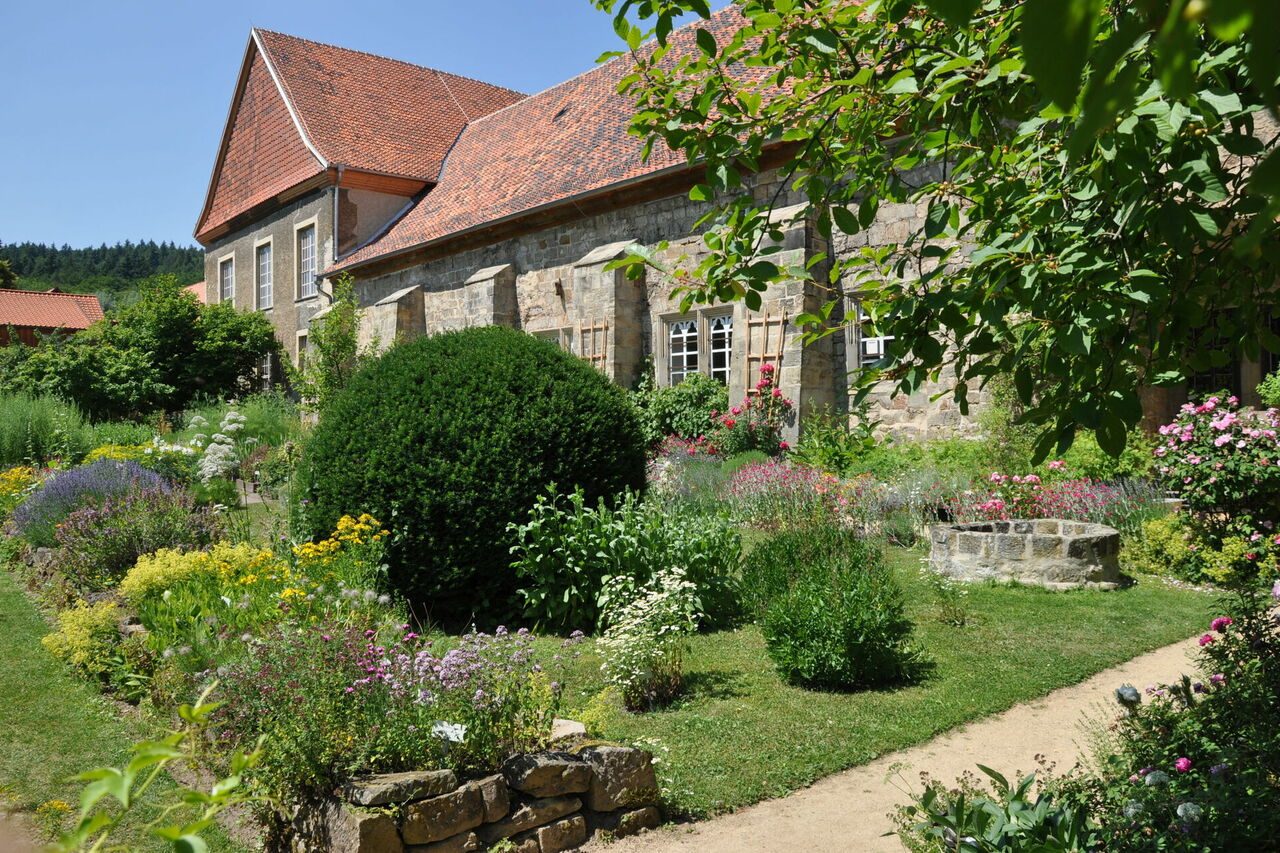 Please note that dogs are not permitted in the Abbey.

Arriving by car (Anreise mit PKW)
Via the B 27, B 81 and A 36 (former B 6); exit “Blankenburg/Zentrum”; in Blankenburg, Michaelstein Abbey is signposted

Public tours once or twice a week from, at special dates therea are garden tours or evening garden tours

Accommodation options in or near the park:

There are educational museum offers for school classes, groups of children and children’s birthdays on the themes: Enclosure Rooms, Abbey Gardens and the exhibition KlangZeitRaum (SoundTimeSpace). Additionally, a monastery workshop with arts and crafts opportunities takes place on some Saturdays in the summer and the abbey festival with the Green Market takes place on the 1st Sunday in August.

The museum with its three themes – history, gardens and music – can be visited year-round. In addition to the exciting permanent music exhibition “KlangZeitRaum” (SoundTimeSpace) – redesigned since 2012 – and the abbey gardens exhibition “Development-Use-Symbolism”, the museum’s offerings are enriched by special exhibitions.

Abbey shops with regional products and the abbey’s own products.